HomeTraditionsTraditions: Why Throwing Rice at Couples is a... 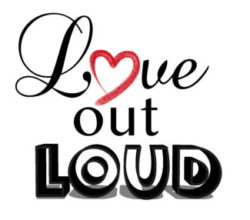 Traditions: Why Throwing Rice at Couples is a Thing of the Past

During a research project for bio-degradable confetti options this week for an upcoming styled shoot – I got inspired to answer a request from a blog reader about our Traditions series. With all of the options we have for confetti now days – from pom poms to paper airplanes – it’s no wonder rice is a thing of the past. Where did this funny tradition come from? Why did it stop? Annie Draper asks “Why do we throw rice at wedding couples?!” Well, Annie, that is a very good question indeed. I’m on it!

As you may have heard, rice is not allowed anymore at many outdoor venues (and indoor) due to an unfortunate rumor that it harms birds after it is thrown and the crowd has cleared. In fact, when I sat down to write this blog post, I was a full believer that birds would eat the rice and it would cause internal issues, causing the bird to get sick and potentially die. According to Snopes.com, this rumor went as far as a Connecticut state legislator introducing a bill to outlaw the practice before it was proven false. The USA Rice Federation (yes, turns out we have one of those) actually had to issue a statement disproving this rumor. Present day, it seems it just makes a bit of a mess, is harder than confetti on the couple, and can be a safety hazard to wedding guests causing slips and falls. 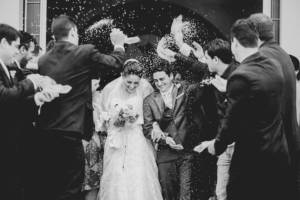 Ironically enough, it seems rice was meant to mimic rain, which I happened to write about in my last Traditions blog. As I mention, rain is meant to symbolize good luck and fertility on your wedding day, as well as keep evil spirits away. The custom of throwing rice began with the ancient Romans and was indeed meant to mimic rain, though at the time they threw wheat instead. In some recollections I researched, the rice or wheat was eaten after it was thrown, meant to compliment the bride – but this tradition was stopped once they realized the brides were probably eating more dirt than grain. 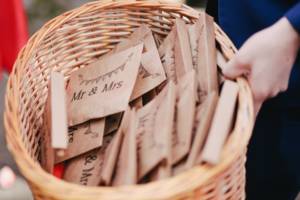 This tradition has evolved between cultures around the world, though each culture does enjoy hurling items at the happy couple it seems! In Italy, guests throw candy (for sweetness) at the couple to imply a sweet marriage. In France, it seems the tradition is kept sacred and the happy duo is showered with wheat. In Morocco, they throw raisins and figs to symbolize fruitfulness. During the Tudor era in England, they began throwing shoes instead! Luckily here in the states, we tend to stick with confetti, light sparklers, and shower the new couple with bubbles or other confetti-like objects. Though I have never personally had rice thrown at me, I can surmise that bubbles or confetti might be a softer option, so many couples have transferred to alternative options in favor of less “painful” wedding experiences. Some other alternatives are to just pass out noisemakers or paper streamers to still get the photos without the mess of debris left behind. 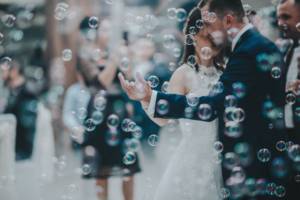 All in all, as silly as it sounds – rice is a fine option to throw at your wedding if your heart desires, and has been approved by various authorities. Just make sure you’ve got your venue’s approval, as well as a potential shield if you’ve got an overzealous guest ready to congratulate you and your new spouse. 😉  Of course, there are always other options to consider from petals to sparklers and more, and we’d be happy to discuss them all with you over coffee and celebrate!

Contact us today to set up a free consultation. To submit a question you’d like answered next time on our Traditions series, contact brittani@loveoutloudevents.com or visit our Instagram page @planitwithloveoutloud and slide on in to our DMs. We really do want to answer these for you!

5 Confetti Alternatives That Still Get The Party Started!

Traditions: The History of Marriage

Traditions: The History of Kneeling

Traditions: Rain is a Good Thing!